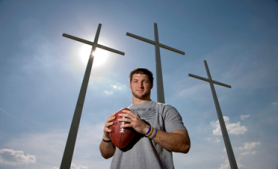 Tim Tebow is an exceptional athlete. He has accomplished a lot during his college and professional career. But the biggest thing he is identified with is being a Christian. He has always been out spoken on his Faith and is not ashamed to talk about it or to give God the Glory for what he has done on the field.

There were a lot of obstacles that stood in the way of Tebow being able to accomplish what he has so far in his life. When his mother was pregnant with him the doctors suggested she have an abortion because she contracted amoebic dysentery and fell into a coma, and the medication used to treat her doctors expected a stillbirth. But she decided against because of her strong Faith. Tebow is the youngest of five children and all were home-schooled so his parents could instill in them their Christian beliefs. One down side to being home-schooled was not being able to play organized sports for the local school they were zoned for, but in 1996 a law was passed to allow home-school children to play and Tebow took advantage of that.

He became a major college prospect and committed to the University of Florida. In 2007 he became the first ever sophomore to win the Heisman Trophy. Although he had an outstanding college career his talent for the NFL was being doubted. But Tebow knew his ability and was humble to what lie ahead of him. He was selected 25th overall in the 2010 NFL Draft by the Denver Broncos. For the next 3 years he would experience ups and downs in the NFL from being a starting quarterback and leading his team to the playoffs on a winning streak to being a backup and then being traded and then out of the NFL all together.

He has continued to pursue being a quarterback, but now has a minor league contract in major league baseball with the New York Mets. But through everything he has faced the one thing that he stands sure on is that honoring his Lord and Savior Jesus Christ win or lose is the most important thing in his life.