In my quiet time this morning I was drawn to Galatians 5:13-15.  It spoke to me on many levels but what I was particularly drawn to was, “You, my brothers, were called to be free.”   As a Christian, I knew something had been blocking me from a deeper relationship with Jesus for almost a year.  I had been close with Him before and nothing was working to get back to that place.  Not prayer, not Bible study.  I began to drift away in my discouragement.  I couldn’t figure out what was going on.  A week ago, I got my answer.

Pastor Rick Bonfim and his ministry team came to the Williamsburg, VA area and preached and taught at two local churches.  I was fortunate to be able to attend most of the services and Bible studies.  After Pastor Rick preached on the third night at the first church, he asked for people to come forward to the altar that wanted prayer for something in particular.  What that was, I don’t remember now.  I do remember him saying to not let the Holy Spirit pass by.  My husband and I went up to the front for prayer with many others.  There was a large response so Pastor Rick called upon a few others to pray over those kneeling at the front.  Somehow, in that transition, we were skipped.  I think they thought someone had already prayed over us and that we were still up there just praying on our own.  I’m not a bold person but I did not want to leave until I was prayed for.  I didn’t want to be passed over.  My husband approached Pastor Rick and asked him to come over and pray with me.

In his Holy Spirit-filled way, Pastor Rick spoke things to me that were so on point that I was surprised.  He knew, without me saying anything, that there was something that had been keeping me from the more intimate relationship with Jesus that I so desired.  One of the things he said was that I wasn’t completely surrendering.  What?  Of course I was!  Well, I thought I was.  Hmm.  Maybe not.  He prayed over me and I fell out in the Spirit.  Then Betty McKinney continued to pray over me while I was still flat on my back.  When I finally got up, my legs were so weak that I could barely walk.  By the time I got home, I had such an energy and excitement in me, I was awestruck.

I then continued attending services at the second church, my home church.  The Holy Spirit continued ministering to me during this time.  I felt such joy and energy during times that I am often tired.  What a great feeling!  Truly being set free.  By surrendering to the Holy Spirit, I became someone God could use more effectively and powerfully because the power of the Holy Spirit was free to move through me.  I was on the prayer team during the first service at my home church.  I prayed for a woman and ministered to her in ways that were beyond me.  At the service the next night, she let me know the way that God had spoken through me to reveal something that was keeping her in poor health due to bitterness and resentment.  She received more prayer that night and was set free from a 40 year bondage.  Our God is a mighty God that takes anyone who will submit and surrender to Him to do His perfect will.  It is awfully humbling to be a part of that.  And the best feeling I know!  I give praise and glory to God for setting me free through His Spirit. 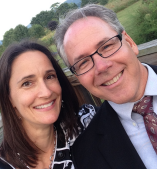