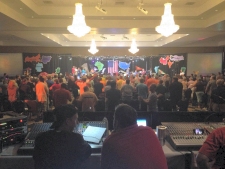 A lot has happened during my time here in Rick Bonfim Ministries.  I have been a part of the annual “Rekindle the Flame” conference here in Athens, Georgia.  I was in charge of the audio and video equipment during the conference.  I organized the lyrics for each of the songs the worship band played during the conference.  The lyrics would be displayed on both of the projectors in the ballroom for all to see.

I have had my fair share of cooking these few weeks.  I bought a crock pot to cook some easy meals.  So the first few attempts I made went well.  I looked up various beef stew recipes since that was the first crock pot meal I wanted to make.  After looking through a few recipes I decided to start with a basic stew and work my way into my own recipe.  The first attempt tasted good and the second attempt with added ingredients was excellent.  Now that I had made a pretty good beef stew I tried cooking a pulled pork recipe I found.  Again the first attempt was good, but the second attempt even better.  I found out that the recipe that I was using was basically adding barbecue on top of barbecue.  The next time I make pulled pork I will try making my own barbecue sauce for the pork to cook in.  I started out with a quart and a half crock pot since the meals were just for me.  I quickly found out that I eat a bit more than that each meal and that I liked sharing my food.  So I bought a crock pot that is intended for five people so that I may share and keep more of the food for myself.