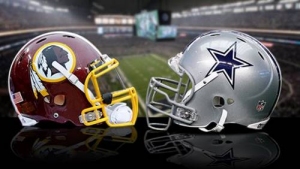 Redskins VS Cowboys. You don’t have to say anything else then that for me to get pumped. I am a Redskin fan through and through. During my time as a fan there has not been a lot of glory days. It has been more of a drought with a sprinkle here and there every so often. But no matter what the record is, the two times the Redskins play the Cowboys during the season, those are the games that mean the most. This rivalry is one of the biggest in all of sports.

This year they met on Thanksgiving Day…..

It was setting up to be a good day, spent time with my family and ate some good food until the final whistle blew. The Redskins had lost and the Cowboys were victorious. Any other time that would have crushed not only my day but my week. But this time I didn’t feel as bad as I use to. I learned recently the source of my hate that I had for the Cowboys. And even though I really didn’t like them, they are still children of God. It’s OK for me to cheer for the Redskins and want them to win, but all things aside we should celebrate more the Victory Christ had over death and know that it was for everyone, and we are ALL children of God (even the Cowboys).

So this Thanksgiving I was thankful for everything Jesus did for me, my family, friends and the Dallas Cowboys. Because even though we wear different colors on the football field, we are all part of the same Body of Christ. I’m still a Redskins fan, but now have love in my heart for those on the other teams, because Christ does too.