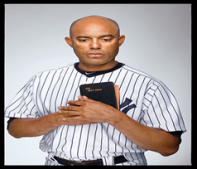 Mariano Rivera or “MO” played 19 seasons for the New York Yankees. He is a five time World Series champion and a thirteen time All Star. He is considered one of the best, if not THE best, closer of all time. When your team was facing the Yankees and you saw him coming out of the gate in the outfield to the mound, the majority of the time your team was finished. His nickname was “Sandman”, because he was coming to put the other team to bed. He holds MLB’s record for most games finished and most saves in a career. He was a dominant pitcher.

One thing that stuck out about Mariano was his pitches. Early in his career he was a power pitcher and threw a 96 mph four-seam fastball. Hitters just could not catch up to it and he acquired a lot of strike outs fast. But the pitch that he threw the best, and made him as successful as he was in baseball was a cut-fastball or cutter. In 1997 while throwing during a warm-up session, he noticed that his fastball was moving sharply and unpredictably. It started occurring during games and after a month on trying to figure it out he embraced it and added it into his arsenal. In 1998 he had perfected it and it was his main pitch to use when he pitched.

When asked about it and how he started throwing it he said “It was a gift from God. I didn’t do anything.” WOW! That is something when a person gives ALL the credit for the accomplishment they have just done to God and admits that they themselves had nothing to do with it. Especially someone who is in the limelight as he was. Mariano was open about his faith, he even had “Phil. 4:13” inscribed on his glove, so that God was always with him on the mound, in victory and defeat. Since retiring from baseball, he established a foundation which helps his native country of Panama by providing underprivileged children with an education, and distributes more than $500,000 annually in the US and Panama through church-based institutions. In 2014 The Mariano Rivera Foundation opened a church in New Rochelle, where his wife Clara is the pastor. Rivera and Clara have dedicated themselves to philanthropy and to his churches since his retirement.