I have always been a HUGE Washington Redskins fan. My favorite player growing up was #28 Darrell Green. He played the game of football with passion and gave it his all every time he stepped on the field. It wasn’t until the end of his career that I learned he was a Christian and that just because he was a football player he was still serving The Lord and reaching people all through his career.

Darrell Green was drafted by the Washington Redskins in 1983. He played for 20 seasons and was one of the NFL’s fastest men until he retired in 2002. He is a two time Super Bowl champion and a seven time Pro Bowler. In 2008 he was inducted into the Pro Football Hall of Fame (HOF). He is a devout Christian and never hid his Faith while playing the sport he loved. He was a talented player and gave all glory to God. He took none of his athletic abilities for granted, but knew they were a gift from The Lord. In his HOF speech he thanked God, and said that all through his career he made sure to make his Lord and Savior Jesus Christ known to those around him.

After his football career, he started the Darrell Green Youth Life Foundation which aims to help children become leaders in their family and communities. He is married and has three children, and his eldest son Jared Green is a pastor. Darrell is now an associate athletics director and special assistant to the athletic director at George Mason University in Virginia.

#HTTR – Hail To The Redskins 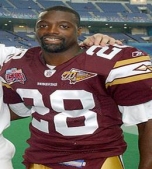